As you know, USA now is the 21st country to legalize same-sex marriage. AND THAT IS JUST VERY WRONG IN MANY WAYS. Can’t you imagine how many countries will follow one of the most powerful country in this world to make gay people able to get married?

And here I am, giving you five and more reasons I hate gay marriage and why people just need to stop supporting it!

You know, gay can spread like a virus and it can infect your straight child if gay people are around your child. Protect them. You know, it’s like when you allow your short child hanging around with tall people, it will make your short child tall. Crazy!

Gay is a crazy behavior, people might now want to marry animals, like their pet. You know why? Because your cat, your fish, or your dog can sign a marriage contract, speak English, and can drive you to hospital when you’re sick.

3. Gay is a disease and should be treated 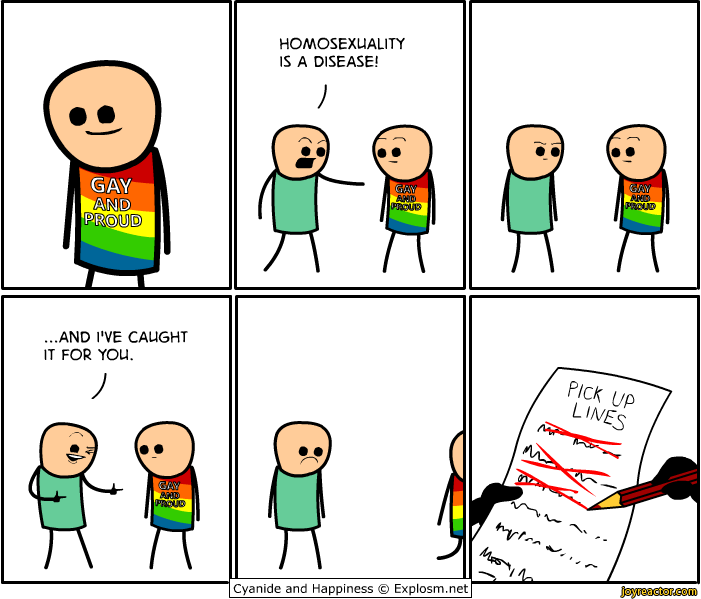 Yeah. Gay is a totally a disease. You are able to not to go to work when you’re gay. Because basically you’re sick “I can’t come to work. Still a lesbian.” I totally don’t care what WHO and APA American Psychiatric Association say that Gay is not a disease. Cuz, I’m more educated than them. Like totally.

Yeah, because our world needs more population. Who cares that we need to eat insects in order to survive.

Because now that it’s legal for gay couple to marry, can you imagine how women all around the world feel, that now they have less chance to marry a gay man. Yes, because totally people around the world want gay to marry a woman. And a woman is more than happy to be a wife to a gay man even though she probably won’t even be touched a second after they get married.

Just like straight people make their children straight, yes because gay all around the world came from gay couples.

7. Children Need A Father and A Mother

Not two fathers and two mothers. You know why? Because no one will succeed without a male and a female role model at home. Just like how Marilyn Monroe, JRR Tolkien, Johann Sebastian Bach, Nelson Mandela never enjoyed success because they didn’t have a mother and or a father.

8. Marriage is about procreation

Like point number four. Gay can’t produce children to fill this overpopulated world. Marriage is about procreation you know. It’s all about that. Infertile couples or couples not wishing to have children then should be prevented from marrying too to be honest. I don’t care if they’re straight. They just don’t understand what marriage is. Yeah because there’s only one religion in this world. And because religion is not a personal thing and you can shove it down people’s throats anytime you want and of course you can force your interpretation of holy book to other people. Because God hates gay, that’s why all of the country that supports gay marriage do better in so many ways than those countries that against it or even kill them gay people.

So what are you waiting for people? Spread the hate, not the love. Tell them that you are TOTALLY not supporting gay marriage because you just don’t want other people to be happy and live a happy life without discrimination. Say no to gay marriage! #HateWins

P.S. :Specially written for my two bisexual friends and every people around the world regardless their gender, orientation, gender, religion, etc. No hard feeling, ok? Because this is just a satire!